I enjoy medium- and long-distance running, especially in mostly urban settings, like local trails. Over the years, I’ve also grown to prefer minimalist running shoes – actually, running sandals. A few years ago, I started my adventures in this minimalist style of running with a pair of the Mono by LUNA Sandals. Recently, I switched over to a pair of LUNA’s Oso Flaco. I try to record most of my runs on Strava.

Having grown attached to running sandals, I’ve been making an effort to move to sandals with a more minimal flavor for the other activities of daily life. Most recently, I’ve been really enjoying the Origen Flaco (also by LUNA Sandals).

As a reaction to my hopeless dependence on caffeine during my undergraduate years, I became inspired to learn more about coffee and its proper preparation. For the past few years, I’ve brewed the lion’s share of my coffee with this pour over dripper by Blue Bottle.

I have spent a fair amount of time experimenting with single origin coffee from around the world, recently relying only on what’s been on offer from Blue Bottle. At some point, I curated a list:

Starting in 2019, I planned to put together a yearly reading list to keep track of books I meant to read/re-read. I now keep a hopelessly outdated list on Goodreads.

“An expert is a person who has made all the mistakes that can be made in a very narrow field.” –Niels Bohr

“Investigate what is, and not what pleases.” –Johann Wolfgang von Goethe

“I occasionally meet geneticists who ask me whether it is true that the great geneticist R.A. Fisher was also an important statistician.” –L.J. Savage

“The secret to creativity is knowing how to hide your sources.” –Albert Einstein

“Don’t worry about people stealing your ideas. If your ideas are any good, you’ll have to ram them down people’s throats.” –Howard Aiken

“The most exciting phrase to hear in science is not ‘Eureka!’ but ‘That’s funny …'” –Isaac Asimov

“I have yet to see any problem, however complicated, which, when looked at in the right way, did not become still more complicated.” –Poul Anderson

“I would give my right arm for the simplicity on the far side of complexity.” –Oliver Wendell Holmes

“All outstanding work, in art as well as in science, results from immense zeal applied to a great idea.” –Santiago Ramón y Cajal, in Advice for a Young Investigator

“Nothing in life is to be feared. It is only to be understood.” –Marie Curie

“The cure for boredom is curiosity. There is no cure for curiosity.” –Dorothy Parker

“And those who were seen dancing were thought to be insane by those who could not hear the music.” –Friedrich Nietzsche

“I am part of all that I have met; / Yet all experience is an arch wherethrough / Gleams that untraveled world whose margin fades / Forever and forever when I move. / How dull it is to pause, to make an end. / To rust unburnished, not to shine in use! / As though to breathe were life!” –Alfred, Lord Tennyson, excerpt from “Ulysses”

“I saw my life branching out before me like the green fig tree in the story. From the tip of every branch, like a fat purple fig, a wonderful future beckoned and winked. One fig was a husband and a happy home and children, and another fig was a famous poet and another fig was a brilliant professor, and another fig was Ee Gee, the amazing editor, and another fig was Europe and Africa and South America, and another fig was Constantin and Socrates and Attila and a pack of other lovers with queer names and offbeat professions, and another fig was an Olympic lady crew champion, and beyond and above these figs were many more figs I couldn’t quite make out. I saw myself sitting in the crotch of this fig tree, starving to death, just because I couldn’t make up my mind which of the figs I would choose. I wanted each and every one of them, but choosing one meant losing all the rest, and, as I sat there, unable to decide, the figs began to wrinkle and go black, and, one by one, they plopped to the ground at my feet.” –Sylvia Plath, The Bell Jar

“A human being should be able to change a diaper, plan an invasion, butcher a hog, conn a ship, design a building, write a sonnet, balance accounts, build a wall, set a bone, comfort the dying, take orders, give orders, cooperate, act alone, solve equations, analyze a new problem, pitch manure, program a computer, cook a tasty meal, fight efficiently, die gallantly. Specialization is for insects.” –Robert Heinlein, in Time Enough for Love

“Remembering that I’ll be dead soon is the most important tool I’ve ever encountered to help me make the big choices in life…Almost everything — all external expectations, all pride, all fear of embarrassment or failure — these things just fall away in the face of death, leaving only what is truly important …Remembering that you are going to die is the best way I know to avoid the trap of thinking you have something to lose. You are already naked. There is no reason not to follow your heart.” –Steve Jobs

“Employ your time in improving yourself by other men’s writings so that you shall come easily by what others have labored hard for.” –Socrates

“Nothing is more terrible than to see ignorance in action.” –Johann Wolfgang von Goethe

“However beautiful the strategy, you should occasionally look at the results.” –Winston Churchill

“Everyone chases after happiness, not noticing that happiness is right at their heels.” –Bertolt Brecht

“Why be a man when you can be a success?” –Bertolt Brecht

“[R.A. Fisher] fitted the classical definition of a gentleman: he never insulted anyone unintentionally.” –J.F. Crow

“Men never do evil so cheerfully and completely as when they do it from religious conviction.” –Blaise Pascal

“If you would persuade, you must appeal to interest rather than intellect.” –Benjamin Franklin

“Socrates: …neither poetry nor prose, spoken or written, is of any great value, if, like the compositions of the rhapsodes, they are only recited in order to be believed, and not with any view to criticism or instruction.” –Plato, in “Phaedrus”

“As if you could kill time without injuring eternity.” –Henry David Thoreau, in Walden

“When I was 5 years old, my mother always told me that happiness was the key to life. When I went to school, they asked me what I wanted to be when I grew up. I wrote down ‘happy.’ They told me I didn’t understand the assignment, and I told them they didn’t understand life.” –John Lennon

“But how can you live and have no story to tell?” –Fyodor Dostoyevsky

“And as imagination bodies forth / The forms of things unknown, the poet’s pen / Turns them to shapes and gives to airy nothing / A local habitation and a name.” —William Shakespeare, A Midsummer Night’s Dream (Act V, Sc I)

“Society grows great when old men plant trees whose shade they know they shall never sit in.” -Greek proverb

“Remembering is only a new form of suffering.” –Charles Baudelaire

“Remembering is painful, it’s difficult, but it can be inspiring and it can give wisdom.” –Paul Greengrass

“We suffer more in imagination than in reality.” –Seneca

“Be patient and tough; someday this pain will be useful to you.” –Ovid

“A ship in port is safe, but that’s not what ships are built for.” –Grace Hopper

“Do not fear death so much as an inadequate life.” –Bertolt Brecht

“Nothing wilts faster than laurels that have been rested upon.” –Percy Shelley

“I am a great believer in luck. The harder I work, the more of it I seem to have.” –Coleman Cox, in Listen to This

“Punctuality is the virtue of the bored.” –Evelyn Waugh 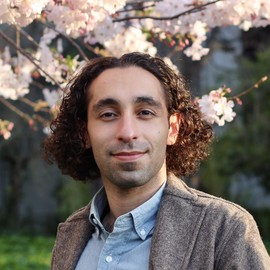 My research lies at the intersection of causal inference and machine learning, developing flexible methodology for statistical inference tailored to modern experiments and observational studies in the biomedical and public health sciences.